How Expedia Group Scales Train the Trainer for Engineers 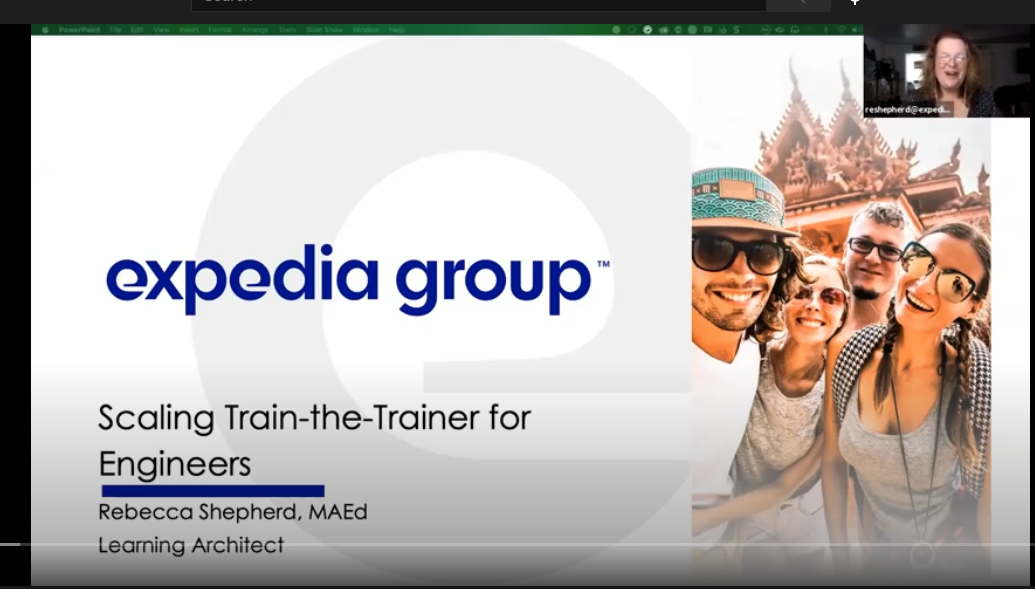 TechKnowCon believes in the power of continuous learning, knowledge sharing, and peer learning. Leaders and Champions in the technical training space join us and share their stories. This is one of their stories.

Creating engaging learning experiences for employees is now crucial to any company wanting to stay ahead and realize their vision.Yet, understanding how to both design and scale these experiences can be challenging.

Expedia Group, one of the world’s leading travel companies, was one of the three organizations to present their ideas at the June 2020 TechKnowCon Discussion. Rebecca Shepherd, MAEd, and learning architect describes how her team developed an ‘Instructor Academy’ to help scale learning at Expedia Group.

Rebecca started her career as a high school history teacher and competitive debate coach. After transitioning to more technical work, she has spent the last seven years in both technical and non-technical roles with Expedia Group.

With over 6,000 software developers spread worldwide, the company has a significant need to understand ever-changing technologies, languages, and frameworks.

In 2015, Rebecca realized an opportunity to help her colleagues develop their technical skills and started the Expedia Code Academy as a side project.

“We started the program with one class. It quickly exploded to nine countries with a ton of classes happening. This was just engineers teaching whatever they wanted to teach,” Rebecca says.

“It became very apparent that they were struggling with putting together their course content. I was in a more technical role at the time, and I saw that they needed help. Eventually, I started work on an Expedia Instructor Workshop. It was a three-hour session, and lots of people joined in.”

Rebecca explains that the first step in scaling learning at Expedia Group was to go back to her teaching roots. “I realized that there is a lot of information that I learned in teaching school that would probably be helpful,” Rebecca says.

“I started to think about the skills that make for an effective teacher, and I went to the Danielson Framework. What the framework gives is a set of dimensions or domains of competency for every educator. I took those concepts and modified them for adult learning and teaching.”

Rebecca shares an adapted version of the Danielson Framework rubric with instructors to explain how they can reach proficiency in teaching.

Afterwards, Rebecca reviews the evidence but does not score it. She then sets up a one to one meeting with the instructors to score their work together. “It’s amazing to see the difference in the quality of the content produced now,” she says.

Experience the next-generation blended learning platform for innovators with PlusPlus.

Based on the TechKnowCon Roundtable hosted on June 24, 2020, moderated by Marko Gargenta, Founder of PlusPlus.

Written by Sophia Wichtowska. Sophia is an educator who specializes in thought leadership, opinion pieces, and content creation for learning publications. Her work focuses on the latest research in learning theory and practice. She regularly contributes articles on workplace learning and professional development.