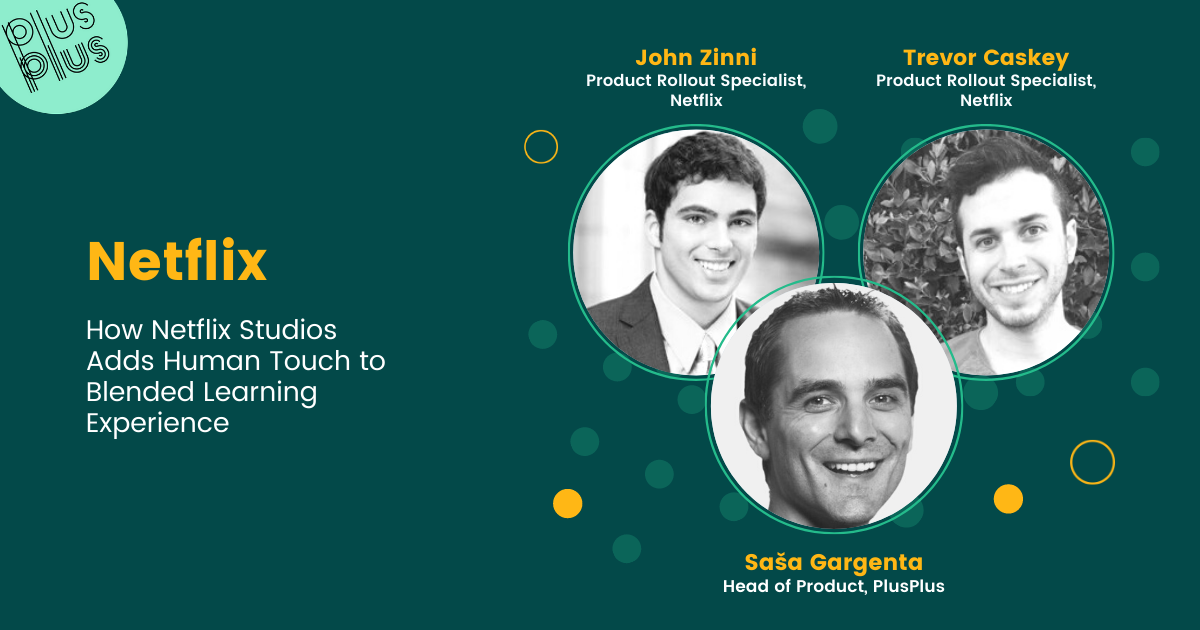 As the entire industry is grappling with how best to support employees working from home, many are experimenting with self-paced learning, for the promise of learn-anytime-anywhere at scale. Yet, the Netflix Studios education team found out that to truly operate at scale, they needed to add back a missing ingredient, one that’s seemingly the least-scalable – the human touch.

Prior to Netflix, John was a TV producer, while Trevor worked on big-budget movies such as Captain America and Ant-Man. Today, they facilitate boots on the ground for everyone making the content for Netflix.

The team supports Netflix Studio: a global network of 1,000s of content creators all over the world. Some are Netflix employees and many external contractors. In terms of scale, Netflix produces over a thousand original titles per year. Creating a single title requires a lot of complexity. To manage this is something that has never been done at this scale before.

To do this, Netflix has developed an ecosystem of internal tools they use to manage this at scale. These proprietary tools require constant onboarding and rollout to the rest of the company. Netflix Studios is truly global so the team has to support employees all over the world.

To help with the understanding of how these tools work, Netflix uses PlusPlus to host its internal workshops, classes, office hours, and onboarding tracks.

In 2020, their scope exploded. The team became responsible for all internal tools for Netflix Studio. As they started scaling all this internal education, they developed a number of services: help centers, in-app documentation, etc. However, while all this support sounds great in theory, in practice they lost the human touch.

“How can we now train and deliver resources for everything that is now under our preview. So, we started shifting our model a little bit. We were no longer leaning solely on in-person workshops and started leaning more into the blended learning approach.”, says Trevor. “We started creating videos, slide decks, help center articles, e-learning courses, in-app support.”

While people were using these resources, this led to a new problem:

So, how did the Netflix Studio team discover the human element is missing? “It was intuition. One tell sign is that when they took the 1-on-1 sessions off the calendar, they were getting inundated with more and more emails. There was a clear void in this initial shift to self-service assets. “The team was losing its soul. By removing the human element, the team lost that warm blanket experience that the rest of Netflix was expecting and relying on.”, says John.

In a meeting with PlusPlus, the team saw the new Experts feature that PlusPlus developed for coaching, mentorship, and office hours use cases. Trevor and John quickly realized that this new module could also support their need for 1-on-1s.

So, why not just use the calendar to schedule these meetings? “At Netflix, people’s calendars are ‘bananas’.”, says John. Trying to find the time to meet with someone is just that much harder that introduces enough friction for people to avoid scheduling them. By having a way to advertise them in a single way, it makes it easy for the team’s internal customers to reach out and schedule a meeting. It makes the team more accessible.

Back to scale, isn’t 1-on-1s not scalable? “I think of 1-on-1s as a true Blended Learning. It makes the experience comprehensive”, says John.

Similar to Ask Me Anything (AMA) sessions on the internet, the team created Ask-Us-Anything offering. The pitch was: Got a question, sign up for a 1-on-1 session and get some quality face time with us.

“In concept, this is similar to office hours. It’s us setting up aside the time for someone when they need it. Except the difference is it optimizes our time. So, for example, if no one books that 1-on-1, we get that time back to work on other things whereas with the traditional office hours, you’re just sitting there waiting for someone to pop in. This new approach fits well with how we do things at Netflix.”, says Trevor.

The key is to make it easy to promote these sessions and make it super easy for people to sign up. “It removes the awkwardness”, says Trevor.

Whereas workshops and classes are still relevant, they are focused on just one specific topic or a tool. 1-on-1s were much less prescriptive. “It is the bespoke experience”, says John.

Why not Slack or email for 1-on-1s? “It’s not a truly blended learning experience unless we have this element of it. People want this type of interaction. We also have Slack”, says John. “We want to offer that warm blanket experience”.

“Every time we have an Ask-Us-Anything, we can feel the impact for that person”, says John. “It feels like this is the right thing, this is the necessary thing to round out our offerings.”

“It is often that people tell us `This is the best meeting I’ve had the entire year`. It’s because they are too often living in this fog that is the ecosystem that is all these connected systems. And this is the meeting where they can ask how one thing is connected to another, how this works here. And truly have someone who can answer these questions for them. ”, says Trevor.

“To give you an idea of the scale, between six of us on the team, we do 40-50 these slots per week.”, says Trevor. “Not all of them get booked, and this is by design. It is about the team making themselves available.”

Blended Learning is the content assets plus the human touch. Assets are good as resources while 1-on-1s help with getting you oriented on what is what and how they connect.

“Other teams at Netflix are now adopting the same approach to learning.”, says Trevor.

“We’re seeing a steady incline in people using it. PlusPlus as a platform itself is used by the majority of Netflix..it had a very natural welcoming since it made it easy for anyone to create an offering”, Trevor

“We use Ask-Us-Anything sessions to polish our assets. If someone is coming to our session and asks a question that we don’t cover in our assets, it is an immediate feedback loop that we need to address in our assets.”, says Trevor.

The Recording of the talk

We use cookies to ensure that we give you the best experience on our website. If you continue to use this site we will assume that you are happy with it.Got itPrivacy Policy